One Household, One Garden (1H1G) project launched in Northern Region 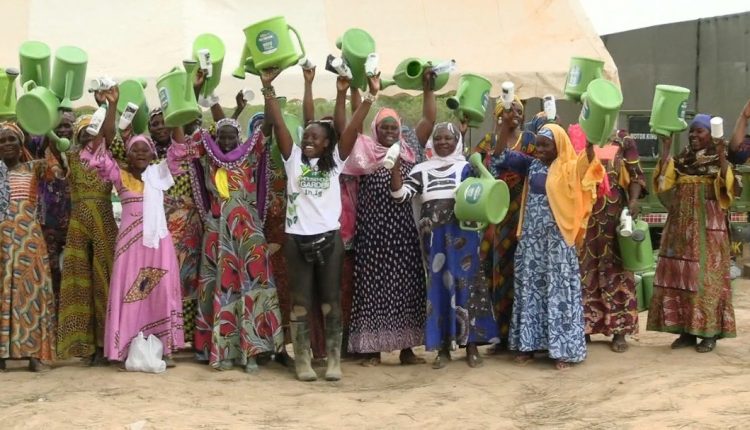 Agrihouse Foundation has launched its home gardening project dubbed: “One Household, One Garden in the Northern Regions.” The project, is to be implemented in 17 districts, within the Northern, North East, Upper West, and East Regions, is targeted at supporting to empower 2000 households and 10 schools, through backyard gardening. The overall objective is to ensure household food and nutrition security. The beneficiary 17 districts include; Tempane, Daffiama Bussie Issa, Nadowli, Sissala East, Sissala West, Wa East, and East Mamprusi. The rest are, Mamprigu Moagduri, Mion, Nanton, Karaga, Garu, Bawku West, Yendi Municipality, Sagnarigu, Gushegu, and Bawku. Each of the 2000 household beneficiaries, after receiving the training, will further be equipped with starter packs, which include trays of vegetable seedlings, seeds, gardening tools, organic fertilizers and pesticides.
The initiative is equally expected to yield a wide variety of fresh vegetables to increase the quantity and quality of nutrients available to the beneficiary families.
Speaking to the media at the launch of the project at Agri-village, Bamvum -Tamale Executive Director of Agrihouse Foundation, Alberta Nana Akyaa Akosa Sarpong says rural smallholder farmers, especially vulnerable women in the five northern regions of Ghana will boost local food production, mitigate the adverse impacts of current global food shocks and food price volatilities, and enhance household food and nutrition security.
She says, the project will further increase incomes of smallholder farmer households by enhancing their capacity to better prepare for and adapt to shocks and stresses. “The project will strengthen food security, as physical and economic barriers to nutritious meals would be removed in the quest for a healthy and active life,” she articulated.

The project is receiving financial support from USAID’s Feed the Future initiative through AGRA. Delivering a keynote address, the Deputy Minister for Ministry of Food and Agriculture; Yaw Frimpong Addo indicated that the project complements government’s planting for food programme, assuring government’s commitment to ensuring that the project is successful.
Juliette Lampoh, the Country Manager of AGRA mentioned that, the 1H1G project is building on AGRA’s Resilience Interventions that are designed around building capacities of small holder farmers to enable them adapt to shocks and stress brought about by climate change.
“In recent years, there has been growing interest in strengthening local food production to mitigate the impact of global food shocks and food price volatility. Home gardens can enhance household food security and nutrition”. She stated.
Present at the launch of the project, were Chief of Kudula and a representative of the Bamvum-Lana, who appealed for government’s support to the project and give all the backings for the Agri-village to grow. They also want the road connecting the Agri-village to the Tamale Business Center improved, so as to encourage easy movement and transportation of farm produce.
The Northern Regional Minister, Alhaji Shani Alhassan Shaibu on his part, encouraged the beneficiaries to make proper use of the knowledge and skills acquired. He says, the training offers them business opportunities as well as healthy life style. Some beneficiaries who spoke to Zaa News expressed their profound gratitude to the Agrihouse Foundation, AGRA and USAID-GIAT for the training they received. They say the knowledge and skills learnt will go a long way to improve their living conditions.
”We thank agrihouse for giving us this training, at least we have learnt so many things that we used not to know, but after this training I can confidently grow my farm produce with all the skills acquired”, a beneficiary from Gushegu declares.

RATIONALE BEHIND THE PROJECT
One may ask, why northern part of Ghana? It’s very clear from comparable national and regional level indicators over the time show that the five regions of the Northern Ghana; North East, Savannah, Upper East, Upper West, and the Northern regions with a total population of 5,842,678 are among the poorest regions in Ghana (Ghana Statistical Service, 2020). The inhabitants from this part of the country are mostly smallholder farmers who produce purposely for family consumption and some instances, sell their surplus to the community and yet have been identified as the breadbasket of Ghana, feeding Ghanaians with the abundant harvest of cereals such as; rice, maize and millet, yam, livestock and cash crops such as cashew, cotton, and especially Shea-Butter (Ghana Tourism Authority, 2017).

Pathetically enough, they depend solely on rain-fed agriculture. Hence, vulnerable to production shocks through natural disasters such as drought, floods, climate change, poor soil, excess rainfall as well as outbreak of new and invasive pests and diseases. Nevertheless, due to the mono-modal rainfall season in these parts of the country and the erratic rainfall patterns because of climate variability and related production shocks, food availability throughout the year is assured for most farming households.

However, between February-July, these regions are affected by inadequate rainfall leading to not enough food provision, forcing farming households to adopt several coping mechanisms including borrowing from family members and friends, selling livestock and household valuables, in some cases, with their children dropping out of school, or migrating to urban areas in search of greener pastures. These challenges often lead to the reduction of food intake and consumption of less preferred food, leading to hunger, malnutrition, and stunting in children.

All these challenges together with the outbreak of the Corona Virus (COVID-19) that affected the global economy, of which Ghana wasn’t an exception presents the need to provide an alternative intervention that boosts the economic status of natives of these regions and also provide such interventions that will close nutritional gaps, reduce stunting and boost the immune system.

The project will help to achieve the outcomes that help to build resilience, capacity building for sustainable production, enhance nutrition, assets, and develop technologies, partnerships and models that can be scaled to have a significant impact on the status of inclusive agriculture in Ghana. The overall objective is to increase vegetable crop productivity for smallholder farmers.