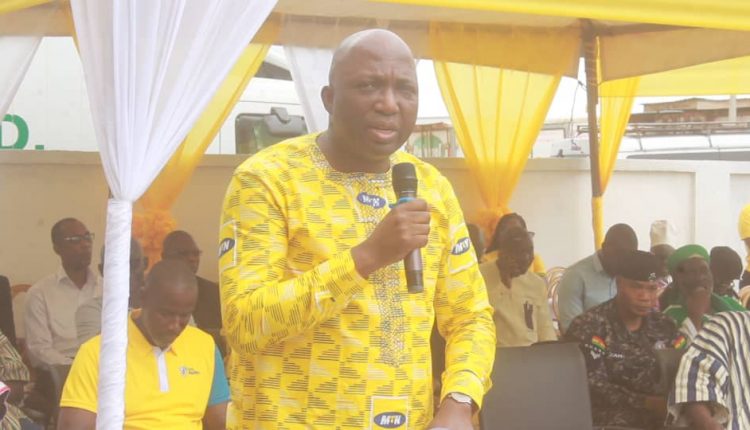 MTN Ghana has given assurance to its customers in the country of investing an amount of 1 billion United States dollar network improvements in Africa by 2025. The Chief Sales and Distribution Officer, Mr. Shaibu Haruna gave the assurance when he presented the state of affairs of the company at this year’s Northern Sector Editors Forum and Stakeholders in Tamale. The engagement forum brought together officials of National Communication Authority (NCA), National Identification Authority (NIA), Ghana Police Service, and Urban Roads Department of the Ghana Highway Authority. Some staffs of the Regional Coordinating Councils of Northern, North East and Savannah regions were also present. This presented an opportunity for top management and technical heads of MTN to explain success, progress and challenges and how stakeholders can contribute or help to cement those challenges for an improved and reliable network.

Mr. Haruna told stakeholders that, despite challenges identified during the year, the company is committed to transforming and extending network services to every part of the country, especially the rural communities. This he said is to address telephony challenges we face in the telecommunication industry. To this end, the telecom giant is devoting 220million dollars to further better its coverage nationwide. He announced that MTN is rolling out 400 new cell sites to augment existing 746 sites which will be upgraded to 4G to enhance quality and speed of service.

In terms of job creation and new innovations, he stated that as at September 2022, over 250,000 agents across the country are providing various services to over 4.2 million subscribers as at 2021. MTN’S 2G network coverage stood at 99.3 % whiles 3G and 4G networks are currently 97.8% and 90.7%. It has also made significant gains in its new technology initiatives such as Ayoba, which has already hit 1.8million users in Ghana. Other technology driven payment platforms introduced, Mr. Haruna mentioned are; FinTech solutions, API marketplace and enterprise service. All have impacted positively on subscribers but he quickly added that, further investments will be introduced to make it easier, accessible and reliable to all. Over 500,000 employments have been created direct and indirect through its partners, distributors, media and Public Relations as well as content providers within Ghana’s economy. A company that believes in local content Mr. Haruna stated, 144 suppliers out of which, majority are around 897 Ghanaian businesses benefiting, representing 75%.

Interestingly, MTN has become one of the largest tax payer companies to the government in the country. For instance, in the first half of 2022, MTN contributed about 29.6 % of its total revenue, amounting to 1.4billion in direct taxes to state agencies responsible for tax. The network has paid 3.1billion Ghana cedis towards national revenue, representing 4.4% of total tax revenue. A total of 297million cedis in were paid to the government as taxes. The national fiscal stabilization levy paid 119 million cedis representing 18%, Communication Service Tax (CST) 56%.

An amount of 64miilion Ghana cedis according to the Chief Sales and Distribution Officer was spent on sustainable community projects in their Corporate Social Responsibility (CSR). The projects include 87 educational projects; ICT centers, classrooms and dormitory blocks, scholarships facilities, 53 health projects including hospitals, blood banks, wards and maternity blocks and hole in heart surgeries, among other interventions. Over 12million cedis was spent on MTN’s scholarship scheme which has so far supported 13,000 needy but brilliant students across the country. About 316 students from the northern region since 2018, he added, benefited from the scholarship which gives priority to female students pursuing Information Technology related programs. Additionally, over a million cedis was also awarded to improve individual businesses nationwide some of whom are in Tamale including founder, Wedam Kadoa Rhoda of Song-Ba Empowerment Center in Tamale. A scheme known as anywhere, anytime work, Mr. Haruna said, has been developed to enable staff a flexible time to work off home and onsite. “In a technology driven world, it is not the entire time one has to be physically present to deliver service in one place; it is productivity driven to make the work environment flexible for everyone.” He stressed.

This and many other innovations led to MTN attaining a platinum investor in people accreditation, a global standard for creating a safe and welcoming environment for work.

In recounting to the stakeholders, he said, out of over 2.8 million subscribers, only 1.9% has so far linked their Ghana cards. Mr. Haruna said, the company is not relenting on its efforts to lessening the burden of customers and has commenced what it called third party’s community shops to key communities where there is no service torch point. This, the Sales Chief explained, is to enable the partners to be able to offer closer services to customers to avoid situations where they have to make long journeys to access a particular service. “We are democratizing our service by making sure that those services are closer to them so that they don’t spend a lot of money to access service.” Mr. Haruna stressed. He said, MTN will continue to collaborate with the National Identification Authority (NIA), pleading with those yet to re-register their SIM cards to make good use of the designated centers in the communities to avoid sanctions instituted by the regulator.

Technical Manager for Bron Ahafo and Northern Regions Mr. Joseph Kojo Addai, expressed worried about fiber cuts and board theft stating that it’s hindering the company’s efforts at providing quality and uninterrupted service. Mr. Addai revealed that the company recorded 39 fiber cuts in the region between January and August largely due to construction works.  Community engagements have started to prevent further stealing of the boards.

The technical manager also encouraged customers who are still using 3G SIM cards to swap to 4G so that the spectrum can be free to enable them experience the speed of 4G. He further revealed that, Northern Region currently has 205 for 3G and 173 for 4G sites. For network upgrades, forty-seven sites were planned and have been completed in 2022. As part of its modernization drive on the sites, 117 sites were modernized out of 125. In terms of capacity expansion, it employed two technologies; the fiber and micro technology to enhance network reliability at the Wunlisi, Nyankpla and Sabare-Zabzugu cluster.