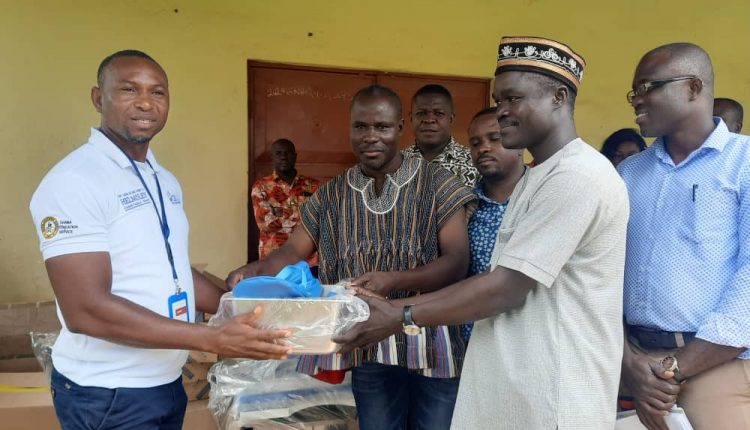 Catholic Relief Service (CRS) through its Developing Acute Care and Emergency Referral System (ACERS) project has handed over medical equipment to the Municipal Health Directorate valued at $40,000 dollars. It was an additional support as part of a $5.2 million-dollar ACERS Project funded by USAID.

ACERS, is a four-year USAID-funded project designed to contribute to strengthening the primary healthcare system in Ghana which started in September 2018 and will end in December 2022. It focuses on improving emergency obstetric and newborn care (EmONC) by addressing the three delays; delay in seeking prompt care, delay in reaching the point of care, and delay in receiving appropriate care in its target districts.

The medical equipment are meant to be distributed to the various CHPS compounds and district hospitals including St Joseph and Nkwanta South Municipal Hospital, the facilities directly involved in the implementation of the project.

Developing Acute Care and Emergency Referral System (ACERS) is a four-year USAID-funded project designed to contribute to strengthening the primary healthcare system in Ghana which started in September 2018 and will end in December 2022.

Head of CRS Tamale office, Timothy Akanpabadai who handed over the equipment to Gushegu Municipal Authorities at Gushegu on behalf of the Country Representative of CRS, Mr. Daniel Mumuni and the Chief of Party for the USAID funded Project, Dr. Mohammed Ali said, ACERS project since its inception has contributed to the reduction in institutional maternal mortality ratios (IMR) in its implementing districts of Gushegu and Nkwanta South.

Currently, the proportion of deliveries attended by a skilled birth attendant has improved to 92% in Gushegu and 85% in Nkwanta South from 69.8% and 53.65% respectively. The CRS head of Tamale office pleaded with health officials to ensure that the equipment are put into good use and maintained regularly in order not to discourage the donor.

This, Mr Timothy said necessitated the need for the project to procure and support the district with these medical supplies to improve EmONC service delivery for improved care of women and children.

Municipal Chief Executive for Gushegu, Yaja Wumbei Robert thanked CRS for their tremendous support to the municipality in the area of water and sanitation and health. According to the MCE, it was the responsibility of the assembly to provide the equipment but due to challenges confronting them, they couldn’t.

“Thankfully, God is on our side that the assembly has a development partner such as CRS, my good self and my municipal health director will put in a proper monetary system to ensure that equipment achieves the target’’, the DCE assured.

Municipal Health Director, Dadia Stephen on his part commended CRS for the donation saying, “it will go a long way to improve healthcare delivery in the area, especially at the facilities.”

According to him, the donation was timely, adding that as a service they have a core mandate to provide all necessary service to the people in the municipality but they can only serve the people better when the equipment are available. The equipment Mr Dadia said will increase safe delivery which has been a challenge for them.

Training Coordinator at the Ghana Health Service in the northern region, Alhaji Tahiru Mohammed assured that CRS the equipment will be put into good use and for the purpose it was provided so that the indicators of each of the equipment will change.