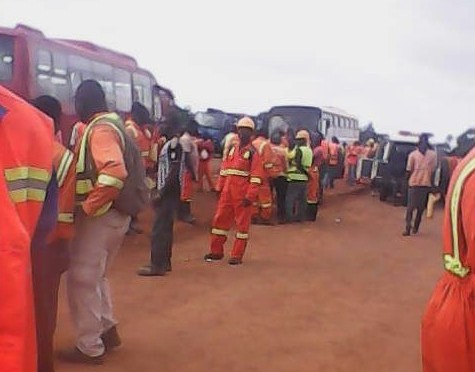 Management of AG Andrade and Gutierrez Odebrecht, the two Brazilian construction firms working on Lot 6, of the North-Eastern corridor in the Northern Region have asked striking workers to call off their strike while they engage union leaders in negotiation over their salary increment issue.

The workers declared a sit-down strike Wednesday after several meetings with the management failed to address their grievances.

The over one hundred and fifty workers are angry that the two Brazilian companies refused to increase their salaries after government increased wages for workers.

Under the increment, the workers were supposed to receive 18% increment in their monthly salary. After several hours meeting with union leaders on Wednesday, the eastern corridor contractors say the workers cannot be on strike while demanding for the salary increment. The contractors therefore asked the workers to resume work while they talk to the workers’ leaders..

Speaking to Zaa News in an interview, the Local Union Secretary of the aggrieved workers, Mohammed Muniru said the delay in forminga  union makes it difficult for them to bargain. Muniru said the local union was formed in March this year to fight for the welfare of the workers.

The management and the workers’ union are expected to be at the negotiation table Thursday morning at 10 am with the Northern Regional Industrial Officer of the Trade Union Congress, Madam Adam Salamatu. Muniru told Zaa News that the eastern corridor contractors have no excuse for not paying them their arrears because their colleagues working at Circle in Accra and the upgrading of the Tamale Airport have addressed the same problem with their workers.

Standoff; workers to management- we wouldn’t go back to work

The workers have vowed not to rescind their decision of calling off their strike Thursday in spite of appeals by their leadership insisting that until they see documentary evidence of their salary increment, they will not go back to work.

There is currently a standoff between management and the workers at the company’s yard in Yendi. Both the transport and construction sections working from Nanumba North district stretch and Gushegu district have laid down their tools.

Yendi divisional police command has dispatched police to the area to ensure law and order.  The police as at 9:00 am local time were locked up in a crunch meeting with the eastern corridor contractors and the workers union executives.