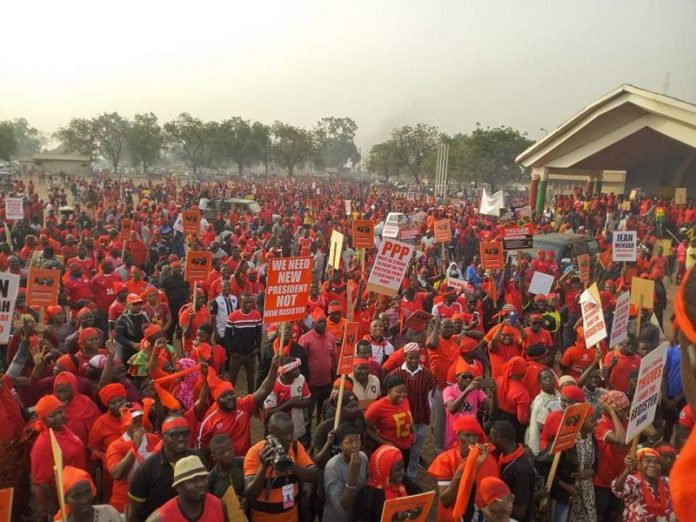 The year, 2020 came with some good and bad things for the people of the northern region. Major events took place some of which surprised many residents. The issues varied from key developmental issues, partisan politics, crime and  major health crises.

The first demonstration organized by Inter-parties’ resistance against the voter register started in Tamale with thousands of people pouring in the streets.

Leadership of the leading political parties such as the National Democratic Congress (NDC) General Secretary Mr Johnson Asiedu Nketia then National Chairman of the People’s National Convention (PNC), Bernard Monarh and host others in attendance. That demo was the focal point for the regional ones.

The mystery surrounding the first recorded covid-19 Case involving 8 Guineans and 2 Burkinabes and the escapee is still at large.

The Northern Regional Capital, Tamale, recorded 10 out of the 11 new confirmed cases of coronavirus in Ghana on 29th March, 2020.

The 10 cases were Guinean residents who travelled to Ghana through Burkina Faso and Togo and were picked following Intelligence report, according to health officials. The l8 Guineans surprised residents in one afternoon when they parked their belongings they want to return to their home country insisting that they were not positive of covid-19 .

The Ghana Health Service made this known saying the total confirmed cases as at Sunday, March 29 stands at 151 as total case count for the country.

The people in the region did not understand and still couldn’t comprehend the circumstances that led to the entering of the foreigners into the region.

From the government side, they came in before the closure of Ghana’s boarders. The regional Security Council also claimed the foreigners were arrested in their hotel ironically behind the regional coordinating council upon their intelligence.

This claimed was disputed by a senior broadcast journalist, Alhaji Baba Jamoni together with others. During the year, the Tamale mayor renounced his title as Tamale Chief Priest Maligu Naa.

The year also saw the assembly led by Superior embarking on a project called’’ The Tamale project’’ where a taskforce stormed major forest reserves within the metropolises to get rid of wee smokers.

The annual flood ravaged several villages, especially along the Eastern corridor and parts of Kumbungu district.

Police brutality at Changli and subsequent Rambo style revenge swoop that led to several innocent people remains one of the issues that residents, especially inhabitants of Changli will never forget.

Over 134 residents were rounded-up people for alleged assault on a police woman.

The incident marred police-civilians relationship in Tamale and has since remain the most unfortunate incident in the annals of the region.

Sahadatu Iddrisu Mohammed according to the Police instigated the assault on the three Police Officers who had visited her home in Changli on April 16 to arrest her over a theft case reported to the Tamale District Police Criminal and Investigations Department.

Corporal Rita Aboagye was beaten to a pulp and left in a gutter while her colleagues fled to report the incident, about half a kilometre away.

In November, 2020 another community, Nanton-Kpawumo clashed with the police. The police again carried out swoop and arrested 26 for their alleged involvement in the assault of three police officers. Sixteen were later process for court.

The legal fraternity in the region were not left out

In October, lawyers at the Tamale high court boycotted court 2 due to the conduct of His Lordship, Gyamfi Osei Danquah.

The lawyers accused him of misconduct which they deem conflicts with the cardinal qualification of high moral standing and integrity required of a judge.

The metropolis also witnessed several rape cases one which turned terrible incidents where a teenager escaped rape but the good Samaritan in an attempt to save her felt victim after the rapist shot and killed him.

The king of Dagbon in September 22, Ndan Ya Naa Abukari II was elected as the president of the Northern regional House of Chiefs for four-year term to steer the affairs.

In February, about 400 tricycles belonging to the Northern Development Authority (NDA) got missing in a mysterious circumstances at their office located inside old Ghana Cotton Company Limited yard.

A document sighted by Zaa News signed by the regional crime officer, Supt. Otuo Acheampong, indicated that the Northern Regional Criminal Investigation Department received instruction from the headquarter to investigate the missing tricycles.

The matter led to the sacking or resignation of the CEO, Alhaji Dr Majeed Haroun.

The document further stated that the former CEO mentioned the deputy CEO of NDA, Samba and National Security Officials in his statement to the police.

It became a huge political issue with opposition NDC ridiculing the ruling NPP for who had made the Savannah Accelerated Development Authority (SADA) a laughing stock. The then opposition had told Ghanaians that SADDA guinea fowls has flown to Burkina Faso.

The year was rounded-up by vigilante group affiliated to the NPP called The Big 6 locking up officers of NBSSI at the regional coordinating council.

As if that wasn’t enough, their colleagues known as Kandahar and Invisible forces and also issuing a stern warning to the board and management of Northern Development Authority alleging that the authority was planning to take about GHC 1.2billion for their end of year party.