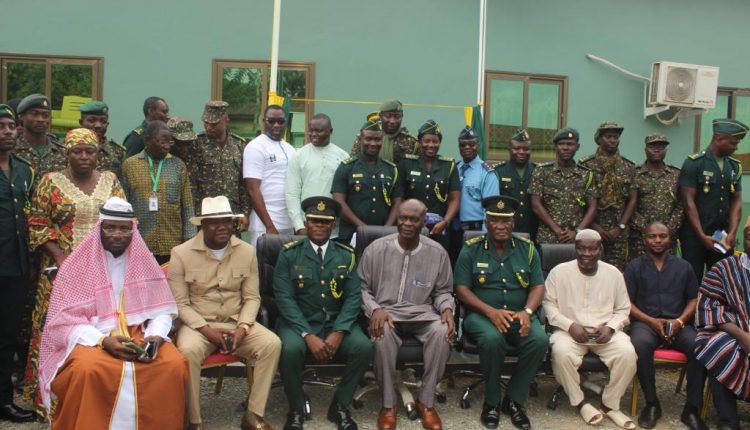 The Yendi Sector Commander of the Ghana Immigration Service (GIS), Chief Superintendent of Immigration (CSI); William Morwu Korley has revealed that, the Command is challenged with acute residential accommodation for its personnel. He says, the Command has made an effort to secure land and has appealed to stakeholders and authorities to help construct a barracks in the Yendi Municipality to create conducive environment and boost the morale of newly posted and transferred officers to the sector.

The Sector Commander made this known on the occasion of the commissioning of refurbished offices of Immigration service in Yendi.  The Yendi Sector Command exists as one of the Service’s Strategic operational bases to facilitate GIS’s monitoring activities. The sector command which comprises Bimbila, Tatale and Gushegu sectors, since its establishment about two decades ago has not seen any major renovations. CSI William in his speech emphasized that the Yendi sector command is not relenting in its efforts to operationalize the rest of the districts including Karaga, Mion, Wulensi, and Kpandai which is in line with the strategic plan of the service. ”The sector is also poised in establishing a database by screening and monitoring activities of all foreigners living in its jurisdiction as enshrined in the Immigration Service Act 573, 2000”, he noted. This he believes would go a long way to enable the command in collaboration with sister security agencies to manhunt and arrest foreigners who may have the tendency to commit crimes and any other immigration related offenses.

The CSI William further mentioned that, the Command has rollout an enhanced community engagement program with its stakeholders, chiefs, opinion leaders, assembly members, GPRTU, corporate bodies, Landlords and hotel owners with concerted efforts to providing relevant information on suspicious foreign nationals and also sensitized them on the national campaign initiative on ”See something, say something”. In addition, he says ”the sector has adapted pragmatic working strategies to counter any potential terrorists who would want to infiltrate into the country without fail, due to the upsurge of global terrorism in the sub-Saharan regions, of which Ghana is not an exception”. Northern Regional Commander of the Ghana Immigration Service, DCOI Dr Prosper Asima urged citizens to cooperate with all security agencies in fighting crime. ”The threat of terrorism is hovering around us, and we must close our ranks to help prevent it, so we are not overwhelmed. I therefore urged you all to put your shoulders to the wheel by being vigilant”, he warned.

Alhaji Shani Alhassan Shaibu who is the Northern Regional Minister on his part, says government has established some mechanisms to assess, monitor, and counter terrorism. These measures include legislative instruments, intelligent gathering and Combat Units to deal with such threats. ”The face-lift provided for the Ghana Immigration Service, Yendi Sector Command Headquarters, attests to some of the proactive measures and huge investments by the government to empower the security services”, the minister added. He appealed to personnel to take proper care of the facility to enhance security in the municipality, the region and country at large