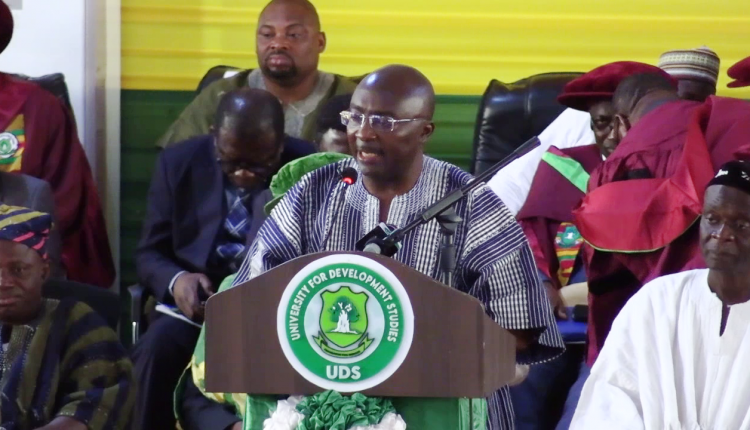 Vice President, Dr. Mahamadu Bawumia has advised management of University for Development Studies to put past issues behind them and forge ahead for the betterment of the university. The vice president acknowledges the role played by both the university and the governing council and the heighten interest leading to the appointment of Professor Seidu Al-Hassan as successor to Professor Gabriel Ayum Teye. He urged the staff to use their vast experiences to help UDS live up to its core mandate and strengthen the university.

Dr. Mahamadu Bawumia calls on the staff to focus on the job ahead of them to deliver the mandate of UDS. Thirty years of UDS, the Vice President said may not be long but its efforts in addressing communities’ problem cannot be over-emphasized. He charged the university to re-align its programmes. The prestige and credibility of universities in the country Dr. Bawumia noted must be zero tolerance for non-accredited programmes in all universities. This is critical to be protected, he stated.

He urged the new Vice Chancellor to take inventory of all new and old programmes to avoid recent revelations by the Auditor-General report that 374 academic programmes at the University of Ghana and over 600 at the Kwame Nkrumah University of Science and Technology are not accredited or have not being renewed.

The Vice President who was speaking at the 5th investiture of the new Vice Chancellor of UDS reiterated the government commitment in investing in education adding that the multimillion lecture halls and conference at Nyankpala campus is about 90% complete and Akufo-Addo hopefully, will open it for the next academic year.

Tamale: Northern Ghana is so dear to US government- Embassy Press Attaché