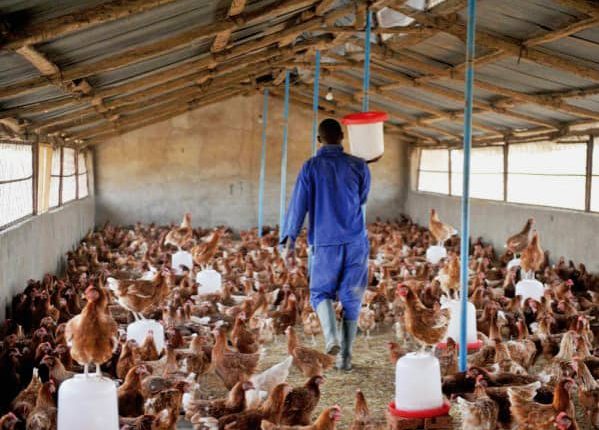 The Ghana National Eggs Campaign Secretariat has warned that, the poultry industry in the country will soon collapse if the government fails to put in place pragmatic measures. According to the secretariat, feeding has become very expensive for poultry farmers in the country. About 60-70% of 100-kilo feed, the secretariat observed is maize. The price now it said is almost 300 Ghana cedis which used to be 50cedis. The secretariat is therefore pleading with the government to make yellow maize affordable at much more subsidized prices at the market so as to enable save the industry from collapsing.

According to the secretariat, they are aware of how the dollar is behaving now but farmers are still on their knees begging the government not to allow the poultry industry to collapse. “Is true we have small scale farmers, 100 birds, 200,500,000 and so on still in businesses, the larger ones are those that feed the whole country and they are closing down “the coordinator stated.

In Ghana, the secretariat started producing eggs in the 60s with the Darko’s farms and in 2000s, several bigger farms spring up to feed the country, Madam Comfort recollected.  She said the country at one point recorded a glut, especially after Christmas and Ramadan and when the egg campaign intensified in 2017, the glut went away. Madam Comfort said the glut is coming back because farmers cannot produce the way they used to, due to the high cost of production.

This, she noted, has led to many   bigger farmers closing down their farms, adding if care is not taken there won’t be enough eggs for Ghanaians.

According to her, if the collapsed farmers and collapsing farms are given the right inputs at the right time, they can still revive and produce enough. On increasing price of eggs, Madam Comfort said even at the farm gate, a crate of 30 big eggs is now 34 cedis and smaller ones crate is sold at 24 cedis.

The farmers, she stated, have no choice then to increase prices to remain in business adding if nothing is done about it, most of the farmers will leave the industry.

On government measures, she told Zaa News that, stakeholders in the industry have been at the doors of the government since last year but the whole problem boils down to inadequate maize.