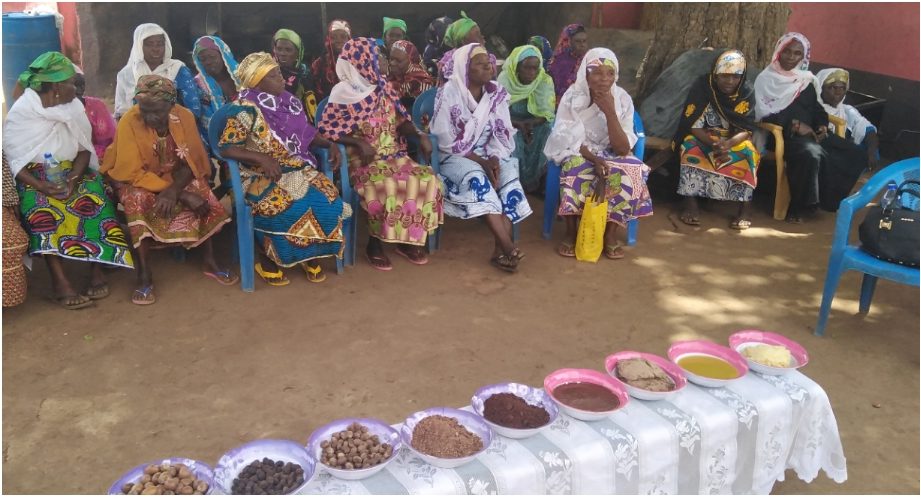 Women in the Shea butter processing in the Northern have called on chiefs and opinion leaders in the communities to institute bylaws baning cuting down of the most valuable shea trees.
The women accused men of undernerating the value of the shea trees in improving their well-being.
The men, the women noted also want an end to Bush burning which is affecting the shea trees.

The women, drawn from Gushegu, Sagnarigu Municipality, Tamale metropolis and Karaga districts advocate sensitization of men on the economic importance of the shea trees.

The women say shea trees are the cocoa in Northern Ghana and all efforts must put in place to protect and preserve shea trees.

The women were sharing their views on how to improve  the shea industry and also to brainstorm on the challenges confronting the sector at a three-day engagement forum organized by Tutenya women shea processing group  in partnership with a UK based charity organization – Lorna Young Foundation and   a cosmetic shop, Body Shop-UK.
The engagement which included five media practitioners from 3 radio stations in the Northern region was to fashioned out a well-designed radio programs on shea for a nine months period.

They reiterated the call for separation of shea from cocobod and recommended the establishment of shea bod to deal with the marriage of issues confronting the industry.
They have also raised issues of rapid development in their communities and chiefs selling vast acres of lands to developers.
These developers, the women noted cut down shea trees which most of them livelihoods depend on.
‘The shea trees are deminishing fast and if care is not taken the trees will become an endangered species soon, the women warned’.
The Mbanaayili based Tutenya shea butter processors told Zaa News that they have initiated process through their husbands to liaise with the chief in the community to allocate land for shea forest and that even if it requires them purchasing, they will.
They were not happy that a shea losed its life as a result of new born baby and urged their men counterparts to begin thinking of other means of fire woods.

On the alternatives source of fire woods, the women suggested planting of Neem and Acacia trees and cutting them for woods.

Another big worried to the women was what they called ‘middle men’, who have invaded the industry with big money with month water price offers.

In the value chain, we have pickers/collectors, buyers, processors and exporters with women doing almost all dirty work but when it comes to buy to process women find it very difficult to shea at various markets, Tutenya women Secretary Mrs Afishitu Yakubu said.

Mrs Afishitu accused men in the Shea butter industry of increasing price of shea nuts and also sometimes physically denied women from buying.
She explained that the middle men pre-finance some collectors in communities where shea trees yields well between March and April where the trees bear fruits.
This practice she added makes it very difficult the women to compote and calling on financial institutions to pre-finance them ahead of the pick period of share to enable them buy enough for processing of shea butter.

A facilitator with Tutenya women group, Hajia Safura Iddi called on government and NGOs in the industry to assist the women with modern tools to collect and process the shea nuts.

She told Zaa News collecting shea nuts and processing it to butter involves a lot labour and risk. She mentioned tools such as wellington boots, hand gloves and kneading machines among others as some of the tools the women need.