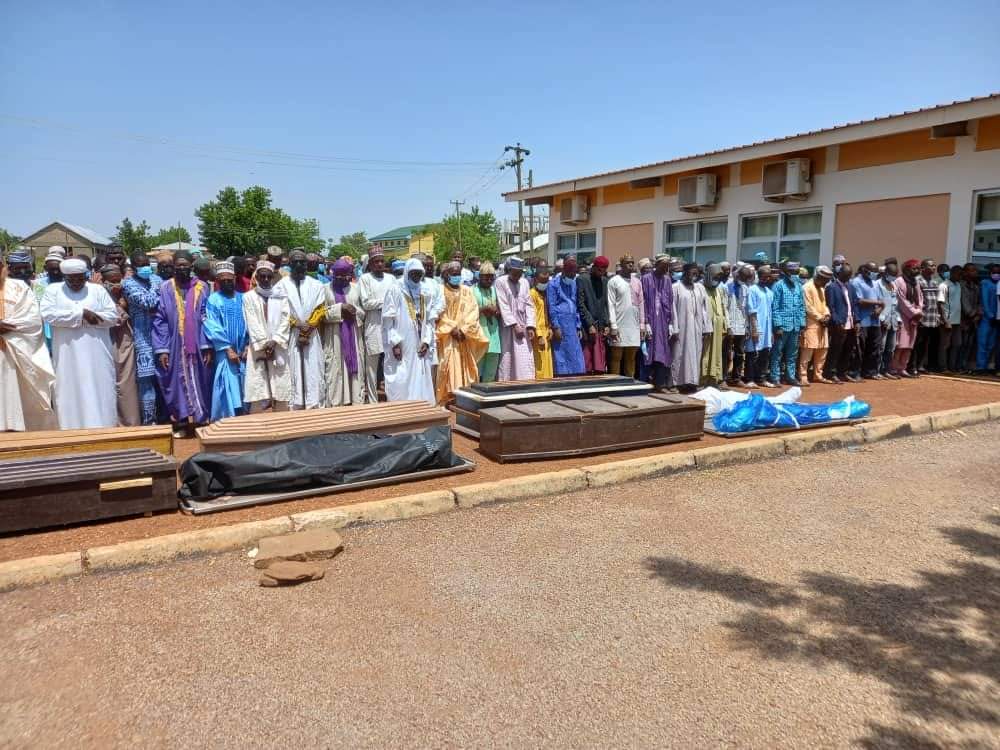 Eight Fulanis killed at Zakoli, a village near Yendi in the Yendi municipality have been laid to rest at the Vitting cemetery in Tamale. The eight deceased bodies were brought to the Tamale Teaching Hospital mortuary for autopsy and perseveration. Salat al-Janaza was performed at the frontcourt of the TTH mortuary.

The Islamic burial ceremony held Sunday April 17, 2022 attracted hundreds of mourners including the vice president, Allhaji Dr Mahamudu Bawumia and the leadership of the Fulani community in Ghana.

The deceased persons were identified as Alhaji Baako, Mallam Osman, Saibu Wubi, and three siblings who were also killed-Umar Jallo aged 30, Kadri Jallo 24, and Yahaya Jallo 27 and eight persons according to police is yet to be known.

The killing sparked widespread condemnation and justice for the Fulanis some of whom were fasting when the gunmen stormed the community largely dominated by the herdsmen.

The yet to be identified gunmen alleged to be Konkombas also set blaze torch houses, makeshift structures and properties running into thousands of Ghana cedis.  On Wednesday April 13,2022 the Zakoli came under heavy attack by gun- wielding men.

The attack was later linked to an armed robbery incident on Yendi-Zabzugu road that led to the death of a teacher of Dagbon State Senior High School believed to be a Konkomba.

Northern Regional Minister, Alhaji Shani Alhassan Shaibu on Thursday April 14, 2022 led members of the Regional Security Council to the community to have first-hand information about the incident.

After he was briefed by the chief of Zakoli about the attack, the minister assured them of government support and that security will be harmed for the perpetrators for the law to deal with them.

Vice president, Dr Mahamudu Bawumia on April 17,2022 visited the community to commensurate with the victims and families the decease and made a cash donation of GHȻ60,000 to them.

Each decease family received GHȻ5,000 whilst GHȻ20,000 was given to the four injured persons who are currently at the Yendi government hospital receiving treatment.

The vice president promised the people that the government would provide relief items to support the victims.