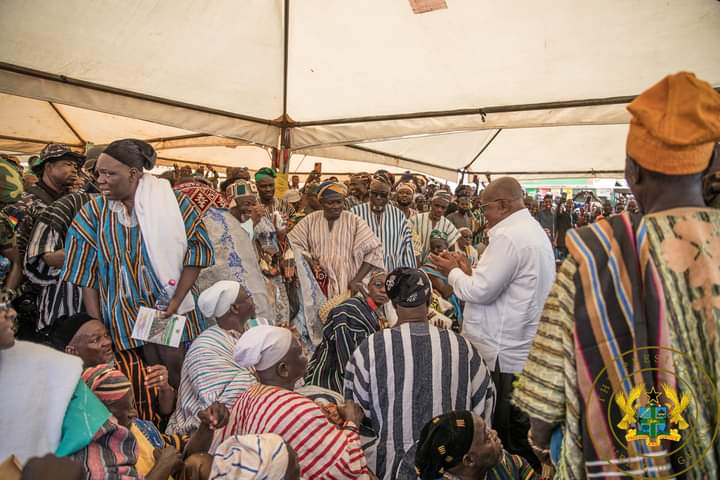 The King and overlord of Dagbon State, Ya-Naa Abukari II has asked the president, Nana Akufo-Addo to do something about the current economic hardship Ghanaians are grappling with.

The increasing food prices and consistent upward adjustment of petroleum prices in the country in the past few weeks together with the plummeting rate of our sovereign currency Ndan Ya Na noted was worrying.

These factors, the King observed, are making life very difficult for many ordinary people in the streets. The King commended the government for conveying key ministers and policy advisors to a cabinet retreat at the Peduase Lodge to discuss the spiraling economic malaise facing the country.

The King whose message was read for him by the Chief of Zangbalun, Dr Jacob Yakubu Mahama at the commissioning of the Tamale inter-Charge/flyover entreated members of Ghana’s parliament to eschewed excessive partisanship that undermines the image of the country’s democracy in the discharge of their work and rather focus on how to build a solid, one united country and prosperity for all citizens.

The king acknowledged the massive asphalting in Tamale and other cities in the region, adding the project will ease congestion in the central business district and improve traffic flow in the Greater Tamale metropolitan area.

The project, the King said, gives real meaning to the government 2020 year of declaration adding the inter charge will give a facelift to Tamale metropolitan area. The rapid urbanization in Ghana he said will swell populations in the major cities in the country and also underscores the importance of the inter-charge.

The project, the King added, will increase economic growth and enhance the living condition of the people. The King urges road users and residents in Tamale to be responsible and comply with all road traffic signs and regulations to avoid the loss of precious lives.

On the Bawku chieftaincy dispute, the king made passionate appeal to the president to initiate effort similar of Dagbon road map to peace between the Nayiri Bohagu Mahami Sheriga and Bawku-Naba Azoka II to improve security situation in Bawku and its environs. ‘Through your bold efforts, the Dagbon State is thriving in peace today, I would like you to extend similar support to my brothers, His Majesty the Nayiri, Naa Bohagu Mahami Sheriga and His Majesty the Bawku-Naba Azoka II to improve security in Bawkku and its environs’, the King appealed.

The instability of any part of the north the King observed has collateral damage on the rest of the entire area as a whole.  On deplorable road network, the King urged the government to speed up the ongoing road projects in the northern region, such as dualization of Yendi road.

‘Before I arrived in Tamale for the commissioning of this major project, I received several reports from many chiefs and subjects about the massive asphalting and improvement of roads in Tamale and other cities in the northern region; Therefore, these projects give real meaning to the government’s declaration of the 2021 and 2022 as years of roads’, the King stated.