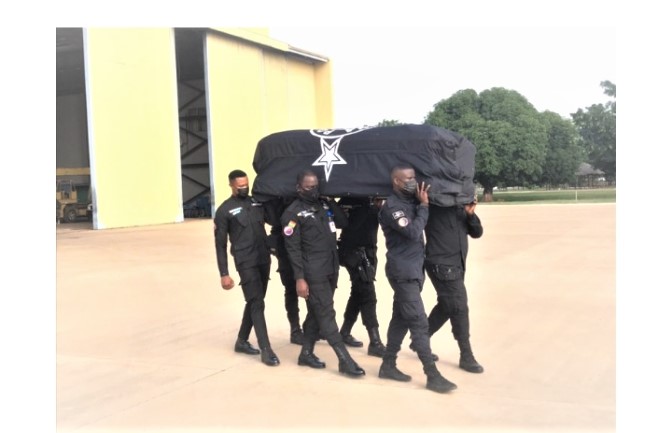 The mortal remains of police officers, Chief Inspector James Akakose Aroma and Corporal Nii Osekle Charles who died on the spot after their vehicle crash at Kareminga, a village along Walewale-Bolgatanga road in the North East region have been airlifted to Accra.

Three other officers aboard the vehicle, Constable Akanvariwen Daniel, Ezekiel Quarshie Tawiah, and Constable Iddrisu Gafaru also sustained varying degrees of injury and were rushed to the Tamale teaching hospital also evacuated to Accra with the assistance of Air Force for further medication attention.

The officers according to the police were in North East Region as well as northern to provide assistance to regional police to fight incessant armed robbery in the area.

Inspector-General of Police, (IGP) Dr. George Akuffo-Dampare, arrived in early hours in Tamale to facilitate the officers airlifting of the injured and also bid farewell to the falling officers in the line of duty.

Briefing the media at the Tamale International Airport, Northern Regional Crime Officer, Superintendent Bernard Baba Ananga revealed that the officers were responding to distress calls and on their way involved in a crash resulting in their vehicle somersaulting.

According to him, two officer’s conditions remain critical as at Friday October 22,2021 while one was treated and discharged.

The officer’s death, Superintendent Ananga said, lowered the morale of personnel until IGP arrived and encouraged them not to give up the fight.

The cause of the accident he said is yet to be established as investigation is still ongoing.