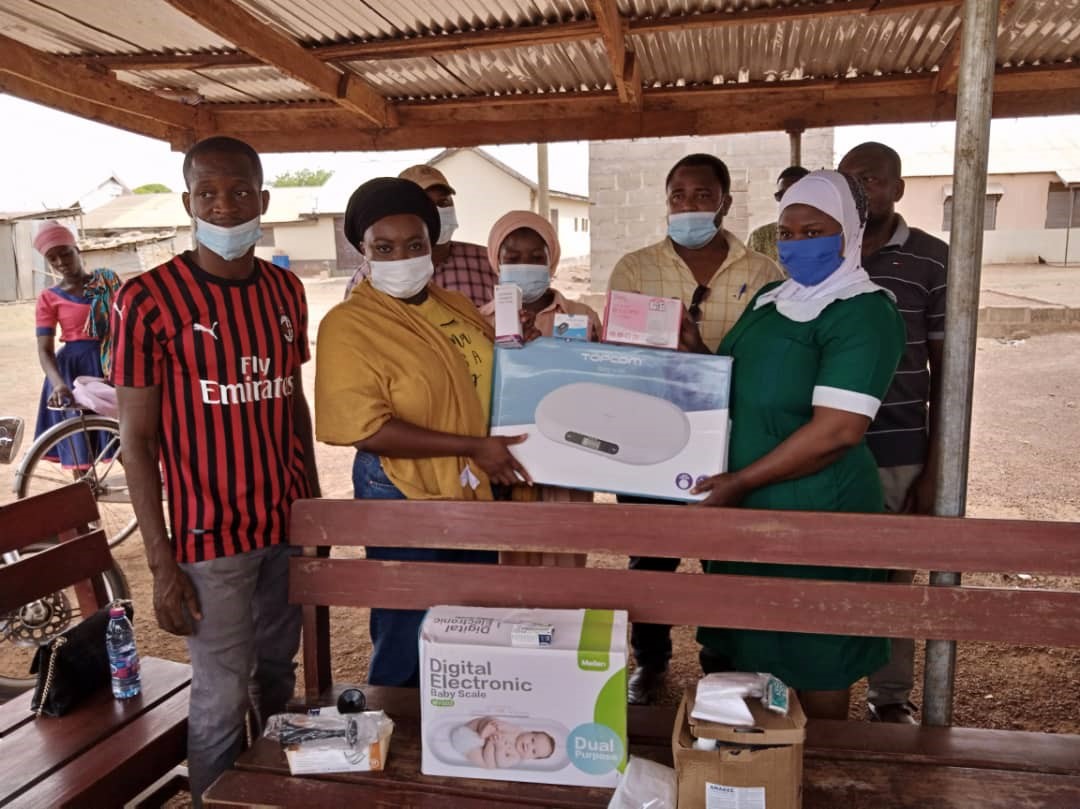 The beneficiary communities; Nyanshegu, Kulaa and Gbalahi facilities were identified as lacking some basic equipment to help in providing healthcare to the people.

The London-based charity organization also provided community members with Personal Protection Equipment such as face masks to help protect themselves and prevent further spread of coronavirus.

Every three years, the organization mobilizes resources in the form of medical equipment and learning materials for needy students and health facilities within the Tamale North Constituency in the Sagnarigu Municipality and the Tamale metropolis.

The SOSGH Founding Director, Ms Amira Pagnaa Iddi at separate locations told the people that the organization prioritized their health and educational needs of young people within their operational area.

SOSGH main source of funds Ms. Amira said was from a team of visionary friends, family members and her colleagues who seek to help the marginalized in our society.

She reiterated her team commitment in ensuring that their developmental challenges are reduced.

’’We have provided resources, stationeries, school bags, and lectures on wellbeing and mental health at basic and senior high schools in the Northern Region and Medina cluster of schools in Accra and by God grace, we will add sponsorship of students in the coming years’’ Ms Amira Pagnaa said.

Beneficiaries applauded Supporting Our Society Ghana for associating themselves with them and continuously support in the areas of health and education. Women who could not hide their joy told the donors that the support was a big relief to them adding they can now honor their conjugal duties after pulling their brakes.

“Some of us were a bit reluctant in allowing our husbands get closer but I think we can now allow them’’, one of them said amidst laughter.

According to them, their health facility was facing a lot of challenges some of which have been addressed by Supporting Our Society Ghana.

The women explained that hitherto, they were traveling to adjourning community-Kalpohini CHIPs compound or Tamale Central and West hospitals which was putting a lot of stress on them.

They prayed for God’s protection and guidance for SOSGH and also more blessings to increase their earnings to help the needy. The women described the support as timely because some expectant mothers sometimes delivered at home instead at the health center.

Whilst heaping praises for the support, the women appealed to  Ms. Amira to consider an additional health facility to augment the existing one.

The chief of Nyanshegu, Yakubu Napari thanked the founder, a practicing nurse for her commitment to ensuring that the facility gets the needed medical equipment.

Nurses at Nyanshegu CHPS compound described the equipment as very useful. Senior midwife in charge, Mohammed Samira commended the founding director of SOSGH, Ms Amira for her constant support to the facility. “She has done well for this facility, this is not her first time of providing us with needed equipment’’, the facility in charge recounted.

The manual weighing scale was not as effective as the electronic one, she emphasized.

The assemblyman for the Nyanshegu electoral area, Mr Mohammed Awal told Zaa News the support brought a lot of smiles to his people and that they are forever grateful to the organization.

Mr Awal attributed the support to the good leadership and lobbying skills of Tamale north MP, Alhassan Suhiyini and called on others to help build fence wall around the facility.