Hundreds Of People Demonstrate Against Economic Hardships In Tamale 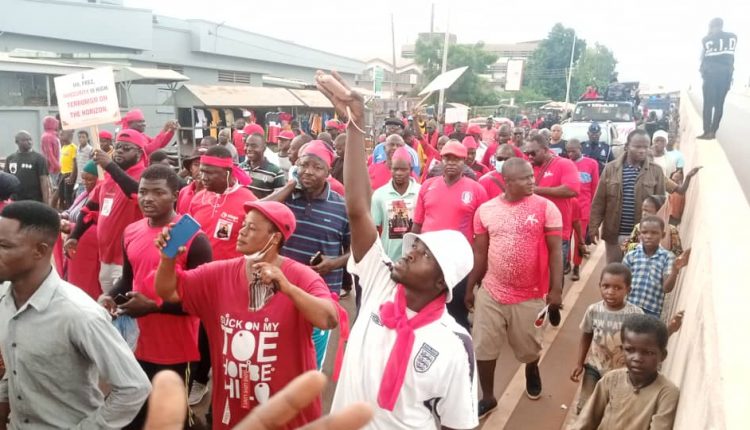 Hundreds of people in the Northern Region on Saturday embarked on a peaceful march against economic hardship in the country. The demonstration dubbed “Miissim” (Hardship) was to draw the government attention to what ordinary Ghanaians are going through. The demonstrators clad with red T-shirts and armbands converged at the Tamale Jubilee Park and walked through some principal streets of Tamale.

Some of inscriptions on their plaque cards read as; “Dr Bawumia cannot fix the economy,” “Mr. President your Finance Minister is the worst Ghana ever had,” “the ambulance service is not a revenue generation agency,” “78.9 debt to GDP is a country in bankruptcy,” “fix our hospitals,” “Mr. President farmers cannot buy fertilizer,” “Mr. President stop the subtle tyranny,” “most Ghanaians are afraid to speak out for fear of losing their lives,” “stop stealing out money amongst others.”

Leadership of the demonstration postponed it from its initial August 20, 2022 due to the death of two prominent people of Dagbon to September 3, 2022. The Northern Regional Chairman of the opposition: National Democratic Congress (NDC), Alhaji Naa Ibrahim Mobila and the Paramount Chief of Mion traditional area, Alhaji Abdulai Mahamadu.

The Chairperson of the planning and organizing committee, Professor Jasper Abembia Ayelazuno told the media that the citizens expect political leadership to address hardship Ghanaians are facing but they are not.

Professor Jasper insisted that “once the politicians reneged their responsibility to solve the problems, citizens have the right to adopt all legitimate means to demand that, the right thing is done because it is the ordinary people who give the politicians the power to govern.”