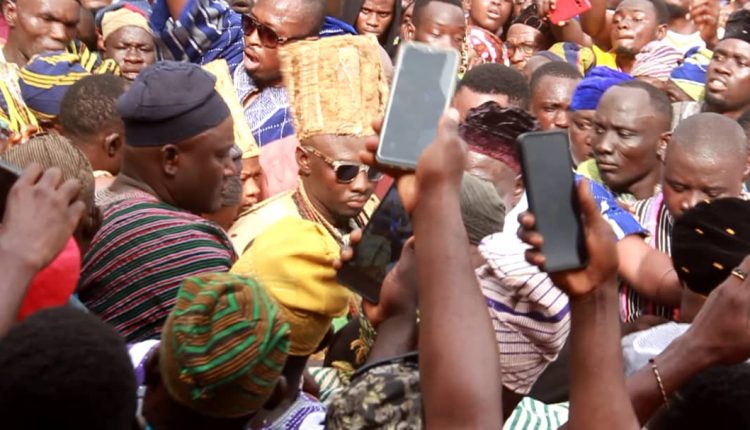 The elderly son of the late Paramount Chief of Mion Traditional Area, Mion-Lana Alhaji Abdulai Mahamadu has been successfully installed as regent. This has been done to enable him carry out his traditional roles until a substantive Mion-Lana is enskined by the Yaa-Naa.

Alhassan Abdulai until his installation, was an officer with the National Intelligence

Bureau of (NIB) headquarters in Accra. Little is known about the regent but Zaa News sources have found out that, he has been with the former Member of Parliament for Yendi; Alhaji Habib Tijani in Accra. The regent was installed on Friday August 26, 2022 after the third (Adu’a) and the seventh day Islamic funeral rites were performed.  Prominent chiefs in Dagbon, Members of Parliament and hundreds of friends and family members witnessed the installation.

It is believed that, the regent is a product of Tamale Secondary School and a graduate of University for Professional Studies where he graduated with BSc Marketing.

Chairman of the funeral committee; Dr Mahama Natogmah told Zaa News that the event paved way for the funeral committee to sit and decide the roadmap that will lead to the traditional performance of the funeral. According to him, the performance of the funeral will not take longer, maximum after the 2022 harvest season.  The chief of his caliber, Dr Natogmah explained the need to have ample time to plan well for the traditional funeral rites to ensure that everyone who attends the funeral is properly catered for. The family he added will also have to consult the oracles to ensure that there is no casualty during the funeral. “The family will make sure that food/security is secured before final funeral rites”, Dr Natogmah stressed. The late Mion-Lana died at the age of 48 at Korle Bu Teaching hospital in Accra on Tuesday 16th of August, 2022 and was buried in the inner chamber at the palace on August 17, 2022 after customary rites were performed.

The late Mion-Lana until his demise was a board member of Northern Electricity Distribution Company (NEDCo) and a believer of education, especially the girl child. During his reign, the Mion traditional area enjoyed peace and many development interventions through his efforts. A six unit classroom is about 50% complete for girls in the area.

Hajia Ayishetu Saani Mahama described the late chief as an embodiment of peace, development and love for not only his immediate family but also the entire family. She has added that “all that he needs now is their prayers as Allah loves him more than we do.”