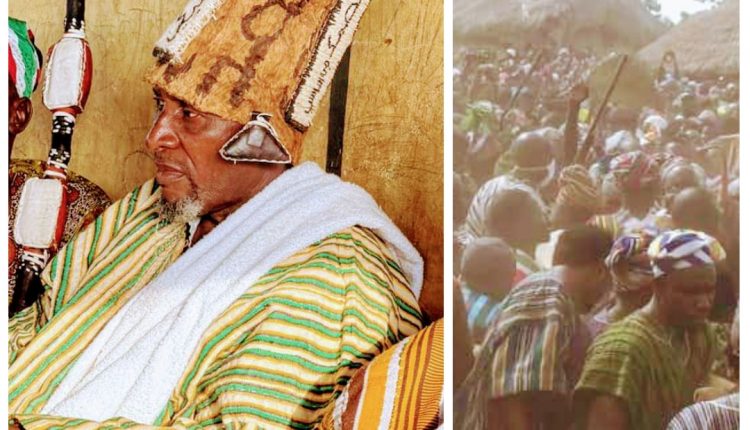 The third and final seven days of funeral rites (Bogli Logu&Gbazhnibu) of the longest serving chief in the Dagbon kingdom, Dalun Lana Mahama Amidu was observed on Friday, August 12, 2022 at Dalun in the Kumbugu District of Northern Region.

The ceremony also marked the installation of the Regent of Dalun Traditional Area together with the sister co-regent (Pakpang). The Regent with the support of the sub-chiefs and elders will superintend over the administration in the area until final funeral rites of his father are performed and substantive chief enskinned by the King of Dagbon.

Dalun-Lana was the first Paramount to be enskinned by the late king of Dagbon, Ndan Ya-Naa, Andani Yakubu II, on November 24, 1976.  Dalun-Lana spent his youthful life in Kumasi before moving to the north for the chieftaincy title. He was the son of Sing-Lana Amiru and grandson of Zulogu-Lana Mahamuru. He died early August 2022, at the age of 115 years. The late Dalun-Lana left behind 10 widows, 67 children and unaccountable grandchildren.

The late Dalun-Lana Mahama Amidu became Dalun chief when the town was about 191 mud thatched houses in 1976 with only one standard 7 graduates. The town currently has over 3,200 households. The then had only makeshift school now Dalun Roman Catholic primary.

Through the Dalun-Lana effort, the town now has 10 primary schools and two junior high schools. The only health center serving the people of Dalun and its environs was established in 1980 by the chief through communal labor.

During his regime, Ghana Friendship in Denmark through the late professor Al-hassan Abukari established Simli Center with a project called Ghana Danish Communities Project (GDCP) which has metamorphosis into the Ghana Developing Communities Association (GDCA) with about five subsidiaries operating in Northern Ghana in the area social interventions, governance and livelihoods empowerment.

In 1979 the late chief choice the single largest irrigation project in northern Ghana located between Wuba and Kpalisungu in the Kumbungu district when the president then, Dr Hilla Limann met chiefs in northern Ghana and asked them to tell him what they want for the people in their respective traditional areas.

Delegation from the Gbewaa palace was led by Kug elders, (Kpamba), Namo Naa representatives, Kpatuya and some paramount chiefs including Sagnar Naa, Kasoli Lana, Bo-Naa, among others who witnessed the installation.

It was characterized by firing of musketries by warriors (Sapashinima/Kambosi) from different traditional areas in Dagbon as well as sympathizers and friends. The 60-years old installed regent, Adam Mahama told the media that his father did his best for his people in all areas and expressed the hope that the people will support him to continue his father legacy.

The regent vision during the period he will be superintending the area is to see Senior High School established for hundreds of Junior High School graduates from overseas communities attend without necessarily to travel to Kumbungu or Kasuliyili.

The third elderly daughter of the late chief, midwife at Sagnarigu health center, Hajia Sanatu Mahama midwife says that, her father was very accommodating, compassionate and loved everyone in his traditional area.  She recounted how her father received alleged witches and accommodated them with only one word “your attitude will let you leave my community’’.

Hajia Sanatu said the late Dalun-Lana tried his best to educate almost all the 67 children some are nurses, teachers among other professions.

Some residents who spoke with Zaa News expressed grief about the passing of their chief describing it as a great loss to the area. One, Abu Abukari described the late Dalun-Lana as an embodiment of peace and one whose legacy will forever remain in the minds of both the youth and elderly. The late chief Mr. Abu ensured that access to pipe born water increased through public standpipes which was only two.